skip to main | skip to sidebar

The link to my new blog is now working!
Posted by Faith at 12:53 PM No comments:

Hop on over to my new blog for (almost) daily inspiration and pretty things! I will still be stopping by here now and again to share stories.

I really don't have many exciting adventures. And that's okay with me because I prefer when life goes along, predictable like, as adventures aren't always all they are cracked up to be. Generally there are some bad spots throw into all that excitement, and I would rather sit at home with a nice cup of tea and a good book while my three children play nicely (and quietly) together for hours at a time without needing to be fed, pottied, or reprimanded.

We were having one of those days recently where they were not playing together nicely and everyone was tired and bored. Including me. One of the things we like to do in such circumstances is to buckle everyone into the van and go out for a bit of a drive in the countryside, seeing if we can spot cows or deer, and just plain enjoy the river or the green green trees.

So off I went with the children all happily seated in their car seats with the promise of french fries at the end of our little meandering drive. We hadn't gone too far when I hopped a bit of the curb while pulling out from a stop sign. It made a bit more noise than would be expected from such a minor incident, but the car seemed to take it well and there was no horrid noises or shaking or smoke or anything of that sort. (My son did inquire as to whether we had a flat tire, but I assured him that if the tire were flat we would not be able to drive the van. Perhaps the apprehensive feeling in my stomach at this point was a little more than indigestion and should have been treated as a foreshadowing of the events to come.)

On we drove for a few miles enjoying the delicious breeze floating in through the windows when suddenly there came a rather suspicious sound from the rear of the vehicle. It was still operating perfectly fine, but there was that sound again, insistent and unmistakable- something was wrong back there. I wasn't sure if it was actually the tire, but that curb had done damage somehow.

Another mile or two passed us by before there was a safe place to pull over. As I approached the rear tire, there was a distinctive sag to it. Not quite flat, but definitely no longer round and plump. I have never had a flat tire in my life, nor have I ever experienced being stranded as a result of car troubles. But here I was, in a jam, with three children, no husband, and no cell phone.
Posted by Faith at 12:36 PM No comments:

If I Had to Choose, I Would Pick a Spider

So, I know I've blogged about this topic before. Some of you may remember and think that I ought to give it up already. I, however, never tire of it.

My husband has a strange relationship with bugs. In the great outdoors he handles them and inspects them with our son; the two of them allow bugs to crawl about on their hands, wrists, and sometimes even to the upper extremities of their arms. (I feel that a bug has gone far enough when it traverses any point more than one inch above the wrist; they have a way of getting lost once inside clothing).

Once a bug crosses the outer wall of our home, however, my husband views it in an entirely different light. After spotting one, he jumps about, shrieks, and carries on in a way that would make any little girl proud. (Unless, of course, she is relying on him to kill the leggy invader). It's really a very strange thing.

If he has recently slaughtered a bug, or has witnessed me in the act of doing so, he gasps horrendously and jumps four feet in the air anytime a fleck of dust so much as floats past his pinky toe. The kids have picked up on this, and while Daddy is in the midst of reading about Noah and the flood at bedtime, they'll take turns tickling his leg hair with their little fingers or poking him in the foot with some long and pointy toy just so they can watch him go into convulsions.

My husband and I try and rotate when it comes to killing the yucky buggies that we find in the house. Mostly I kill anything in the basement because my husband somehow manages to convince himself that they can't climb the stairs into our living space. I'm pretty sure that anything that can climb walls and walk on the ceiling can find its way up into the kitchen, so if I spot a spider in the cellar I am going to make a valiant effort to squash it so that it doesn't find me and try to suck my face off while I sleep.

There is one bug in particular, though, that we are both deathly afraid of. The many legged, and very freaky, house centipede. The other day I watched helplessly as one scrambled into my laundry sorter in the basement. I certainly didn't want it jumping on me as I dug through piles of dirty clothes. Nor was I willing to neglect the laundry any longer than I already had. So I called the man of the house.

I really wasn't expecting him to ride majestically down the basement stairs on his white steed, and vanquish the fearful beast, but I figured that at least I would get some moral support. After we both stood staring at the laundry sorter for a few minutes while I scratched my head and he persisted in alternately jumping and shrieking every two-point-six seconds, my husband had a brilliant idea and left me alone with the monster while he went to fetch his long-handled grilling tongs.

What a picture I'm sure we made as my husband gingerly plucked through dirty tee shirts, jeans, and undies with his tongs while I made sure to keep myself safely out of range of his flailing limbs. Somewhere near the bottom of the pile the beast flung itself from the sorter and fled to a safer, darker corner where I am sure it remains, biding its time, making its plans, and growing bigger by the second.
Posted by Faith at 9:49 PM 1 comment:

No Hair, No Where

My son is a very curious sort of fellow; he notices everything, and likes things to be just so. He has an amazing capacity for memorization. When he reads a book or watches a video he can remember facts in detail. He asks a lot of questions. He reads all by himself. He uses big words. He is four and half.

So far his studies consist mainly of facts about marine animals, dinosaurs, and bugs, although he knows a little bit about lots of other things, like the difference between herbivores and carnivores, what decay is, when to flip a pancake, how to tell time, and different kinds of weather.

Unfortunately, none of his forays into the field of science or language prepared him for what he came face-to-head with the other evening. The little man was sitting on the arm of the couch with his Grandad on the cushion next to him when he looked down and got an eyeful of the top of his Grandad's head. Grandad has slowly been losing his hair for a few years now- his scalp is still loosely covered with hair, but it is rather noticeably thin when seen from atop.

In a concerned sort of way, my son started poking around at my Father's head. He had never been introduced to the words "bald" or "balding" before, and he just did not understand what it was that he was looking at. My Dad is a jolly sort of fellow, so naturally he had a good laugh over it. The little man, however, did not seem amused, and when his own Daddy came home later that eve he took it upon himself to make sure that Daddy still had all of his hair. So far, so good. 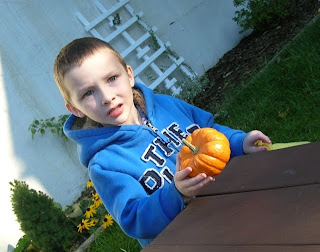 A couple of months ago, a girlfriend of mine flew home for a visit, and she was surprised that I did not have any felt garlands hanging around. I had been so busy creating them for my shop that I just hadn't taken the time to create one for myself. Well, she's back for another visit and I have finished creating a garland to add to my front window treatment just in time! 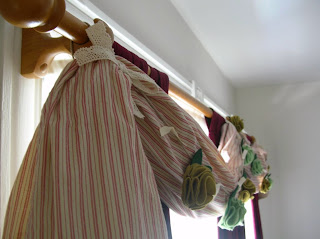 Why is it that little people always try and grow up too fast? I vaguely remember that feeling, that rushing when-will-I-be-able-to-eat-candy-for-breakfast sentiment that comes with the irresponsibility and ignorance of youth. When one is young, one wants to be able to make every decision (and then one becomes an adult and making decisions isn't always as much fun as it's cracked up to be).

My four-year-old son recently had the following discussion with me.

The next day he went on to tell me that when he's five he's calling me "Faith."

Seriously, I know there is a certain amount of independence that comes along with knowing how to read, the ability to state the difference between herbivores, carnivores, and omnivores, and being able to discern the particular type of a dozen different dinosaurs and sharks by sight, but I want to be "Mommy" for at least a few more years. Indefinitely would be better.
Posted by Faith at 8:57 PM 3 comments:

Faith
"They" say to write about what you know. So this is me, writing about what I know: life with my husband, our four-year-old son, two-year-old daughter, and newborn baby girl.

Copyright © 2007-2010 Has Anyone Seen My Cape? The content, text, and images on these pages are the sole property of the author. Republication or reproduction in any manner is strictly prohibited without prior written consent. All rights reserved.