skip to main | skip to sidebar

How I Became a Mommy Again - Part 3

To get an epidural, or not get an epidural, that is the question. Most people consider that a stupid question; most people would say, “why the heck not?!” My mother delivered all four of us without the aid of spine tingling, leg numbing, is-my-butt-still-there drugs. I had always wanted to experience a natural delivery; however, I was rather unfortunate to have Pitocin coursing through my veins with my first two deliveries. I tried to be brave, but there comes a point when bravery just becomes stupidity- at least in my mind.
The first question that I remember being asked when I checked into the hospital was, “do you want an epidural?” My wishy-washy response (which was something like a whiny I-don’t-know) turned into a slightly more positive refusal when I realized how quickly my labor was progressing. I really wanted to try it sans drugs, and, in between contractions, it didn’t seem like such a bad idea.

Daddy arrived at the hospital about half an hour after I checked in. By then I was already nine centimeters dilated and the pain from my back labor was quickly approaching the unbearable zone. Great was Sean’s agitation and incredulity at the fact that there was no catheter pushing mind-soothing juices through my spine; greater still did it become when I needed to be unhooked from the monitors in order to go to the bathroom and the floor between the bed and the bathroom door seemed to stretch on in endless miles of pain and suffering for those destined to walk them.

Well, I made it to the bathroom. I made it back to the bed. I got my hands on the bed. Somehow I even managed to get my knees on the bed. And then I was hit with what I now know to be absolute, this-is-the-end, hello-I’m-having-this-baby-now contractions. It was right about here that I blurted something like “I want drugs” (who said that?). Yes, I am ashamed to say that those very words popped right out of my mouth. It was a good thing that deep down I didn’t really want them because it was too late anyway; it was probably already too late when I had walked in the door. Something else I found out about myself at this point- my instincts kick in and I have no sense of decorum or self-respect whilst in the throes of labor.

In other words, I got stuck on my hands and knees. No, I wasn’t going to lie down, and now that you mention it I think I may just start to push. Just as I had gotten into bed the chief resident had come to check on my progress. She couldn’t convince me to lie down either, so she just peeked around my back end and said, “Oh, she’s full! There’s the head!” Generally when the head crowns that means the time to push has come, but since the doctor was still a mile or two down the road the order not to push was being given on all sides and I felt the nurse place her hand against the baby’s head.
I think everyone in the room was on the phone at this point. “Get the house doctor!” “Find the chief resident!” Somewhere in there I heard, “Her doctor’s on the bridge!” That is to say, he was almost there. 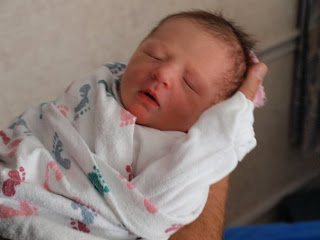 Oh come on! don't leave me hanging here! Ending the post there is just cruel!

O.K. anyone who tells a mom not to push when it's time to push needs to be tortured themselves! Not fair!
I'm loving your story.

Faith
"They" say to write about what you know. So this is me, writing about what I know: life with my husband, our four-year-old son, two-year-old daughter, and newborn baby girl.

Copyright © 2007-2010 Has Anyone Seen My Cape? The content, text, and images on these pages are the sole property of the author. Republication or reproduction in any manner is strictly prohibited without prior written consent. All rights reserved.